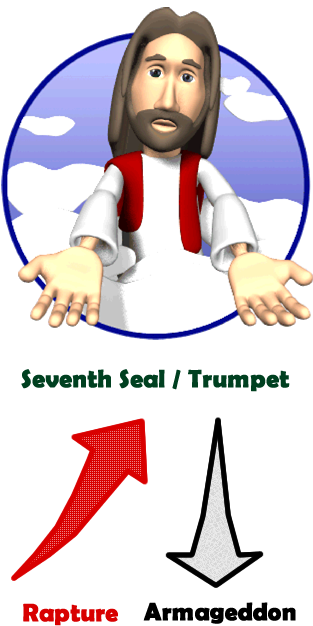 But in the days when the seventh angel is about to sound his trumpet, the mystery of God will be accomplished, just as he announced to his servants the prophets.”  (NIV)

But in the days of the voice of the seventh angel, when he shall begin to sound, the mystery of God should be finished, as he hath declared to his servants the prophets. (KJV)

Listen, I tell you a mystery: We will not all sleep, but we will all be changed— in a flash, in the twinkling of an eye, at the last trumpet. For the trumpet will sound, the dead will be raised imperishable, and we will be changed.

When the Seventh angel sounds his trumpet, Christ has opened the last seal on the scroll which is part of the book of life containing the names of the Children of God.  It is time for the Children of God to be revealed.  When the trumpet sounds, poof, in a flash, in the twinkling of an eye, the first resurrection and the rapture take place.

I consider that our present sufferings are not worth comparing with the glory that will be revealed in us.  For the creation waits in eager expectation for the children of God to be revealed.

Creation is waiting in eager expectation for the Children of God to be revealed.  This will happen when the Lamb opens the last seal on the Scroll which is part of the Book of Life.  At that moment, the Children of God will be redeemed from the Earth but not before those who are asleep in Christ are raised.

The seventh angel sounded his trumpet, and there were loud voices in heaven, which said: “The kingdom of the world has become the kingdom of our Lord and of his Messiah, and he will reign for ever and ever.” And the twenty-four elders, who were seated on their thrones before God, fell on their faces and worshiped God, saying: “We give thanks to you, Lord God Almighty, the One who is and who was, because you have taken your great power and have begun to reign. The nations were angry, and your wrath has come. The time has come for judging the dead, and for rewarding your servants the prophets and your people who revere your name, both great and small—and for destroying those who destroy the earth.”

When the seventh angel sounds his trumpet, the kingdom of this world becomes the kingdom of our Lord and of his Messiah and he will reign for ever and ever.  The mystery of God is accomplished (Rev 10:7) and the sons and daughters of God are revealed.  The Book of Life, the little scroll has been opened and those who inherit eternal life as the Children of God are raptured or resurrected to be with Jesus and will remain with him forever.

The dead outside of Christ are not resurrected for judgment until after the Millennium.

I watched as he opened the sixth seal. There was a great earthquake. The sun turned black like sackcloth made of goat hair, the whole moon turned blood red,  and the stars in the sky fell to earth, as figs drop from a fig tree when shaken by a strong wind.  The heavens receded like a scroll being rolled up, and every mountain and island was removed from its place.

Then the kings of the earth, the princes, the generals, the rich, the mighty, and everyone else, both slave and free, hid in caves and among the rocks of the mountains.  They called to the mountains and the rocks, “Fall on us and hide us from the face of him who sits on the throne and from the wrath of the Lamb! For the great day of their  wrath has come, and who can withstand it?” (NIV)

The sixth seal involves an earthquake, signs in the sky, stars falling to earth and the heavens receding like a scroll being rolled up.  The kings of the Earth, princes, general, the rich and mighty and everybody tried to hide form what was about to happen in the next seal.  For the time of God’s wrath has come.  God’s wrath will not be poured out until the Church is removed and the 144000 are sealed.  (1Thes 5:9)  This is exactly what happens next and then the seventh seal is mentioned.

After this I saw four angels standing at the four corners of the earth, holding back the four winds of the earth to prevent any wind from blowing on the land or on the sea or on any tree.  Then I saw another angel coming up from the east, having the seal of the living God. He called out in a loud voice to the four angels who had been given power to harm the land and the sea:  “Do not harm the land or the sea or the trees until we put a seal on the foreheads of the servants of our God.” Then I heard the number of those who were sealed: 144,000 from all the tribes of Israel.

A Great Multitude appear in Heaven

After this I looked, and there before me was a great multitude that no one could count, from every nation, tribe, people and language, standing before the throne and before the Lamb. They were wearing white robes and were holding palm branches in their hands.  And they cried out in a loud voice: “Salvation belongs to our God, who sits on the throne, and to the Lamb.” All the angels were standing around the throne and around the elders and the four living creatures. They fell down on their faces before the throne and worshiped God, saying: “Amen! Praise and glory and wisdom and thanks and honor and power and strength be to our God for ever and ever. Amen!” Then one of the elders asked me, “These in white robes—who are they, and where did they come from?” I answered, “Sir, you know.” And he said, “These are they who have come out of the great tribulation; they have washed their robes and made them white in the blood of the Lamb. (NIV)

When he opened the seventh seal, there was silence in heaven for about half an hour. (NIV)

This begs the question: “What about the other trumpets, are they coincident with the respective seal.

The seven bowls of God’s wrath are part of the seventh trumpet and are poured out after the Church has been raptured.