In describing the events associated with the opening of the seven seals, John seems to take a break between the six and the seventh seal, the so called interlude, where he seems to describe two apparently unrelated visions.  The vision of the 144000 who were sealed from the 12 tribes of Israel (Rev 7:1-8) and a vision of a Great Multitude from every tribe and language who had been through the Great Tribulation and appear in heaven (Rev 7:9-17).

Similarly, when John is describing the events associated with the seven trumpets, he takes a break between the sixth and the seventh trumpet, another interlude, and describes two further visions that seem somewhat unrelated.  The vision of the angel and the little scroll (Rev 10:1-11) and the vision of the Gentiles trampling the Holy City for 42 months and the two witnesses prophesying for 1260 days.  (Rev 11:1-14)

Post tribulationists (who believe the rapture is post-tribulation) say that the second coming of Christ to rapture the church takes place at the beginning of the last trumpet which coincides with the seventh seal. The Wrath of God is the seven bowls which are part of the seventh trumpet.

Pretribulationists (who believe the rapture is pre-tribulation) say that the second coming of Christ to rapture the church occurs at or just before the seventh seal but the trumpets, being the wrath of God, follow the seals and are not concurrent with the seals as suggested by post tribulationists.

John was given a vision of a scroll with seven seals which nobody was worthy to open but the Lamb of God who was slain and with his blood purchased for God people from every tribe and nation people and language.  In the ensuing chapters, the Lamb begins to open the scroll which can only be the Book of Life.  Once the Book of Life is opened, the Children of God are revealed and the Lamb Christ returns to redeem his people.  It, therefore, makes sense that the rapture should take place at or just before the seventh seal is opened.

When the Book of Life is opened, the rapture and the first resurrection take place.  A Great multitude appear in heaven.  The Great Multitude appearing in heaven appears between the sixth and the seventh seals.

If the Trumpets are aligned with the seals, if they recapitulate the seals and are concurrent with the seals, then the interludes would also be aligned.  The opening of the Little Scroll would be concordant with the Great Multitude appearing in heaven.

What can be made of the vision of the Gentiles trampling the Holy City for 42 months (Rev 11:2) and the two witnesses prophesying for 1260 days (Rev 11:3) in the interlude between the sixth and the seventh trumpet?

The duration of the great tribulation will be 1260 days or 42 months which is 3.5 years.  (Rev 12:6, Rev 12:14 & Rev 13:5-8)  The point at which this vision is given, the great tribulation is about to end.  It would, therefore, appear that the gentiles finish trampling the Holy City at the time the seventh trumpet sounds and the two witnesses also finish prophesying at this point too.

The 144000 being sealed and the woman being taken care of for 1260 days, the gentiles trampling the Holy City for 42 months and the two witnesses prophesying for 1260 days, all span the duration of the great tribulation but are not mentioned until it is almost over – just before the seventh seal or the seventh trumpet (assuming they are simultaneous).

These visions are, therefore, retrospective or recapitulations given the point at which they are mentioned.

The interludes between the sixth and the seven seal and the sixth and the seventh trumpets do appear to be concordant and concurrent with one another.  The Little Scroll is opened just as the seventh seal is opened and as the seventh trumpet sounds and then the rapture takes place and a great multitude appear in heaven.   Also, the 144000 are revealed having been sealed and protected for 1260 days.  The Holy City has been trampled for 42 months and the two witnesses are about to finish 1260 days of prophesying.

Revelation paints a glorious picture with many elements that are described one at time rather than in time sequence. 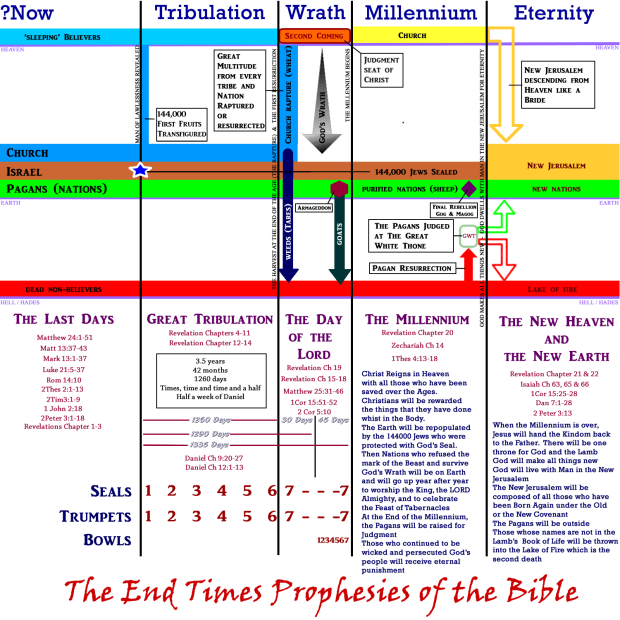 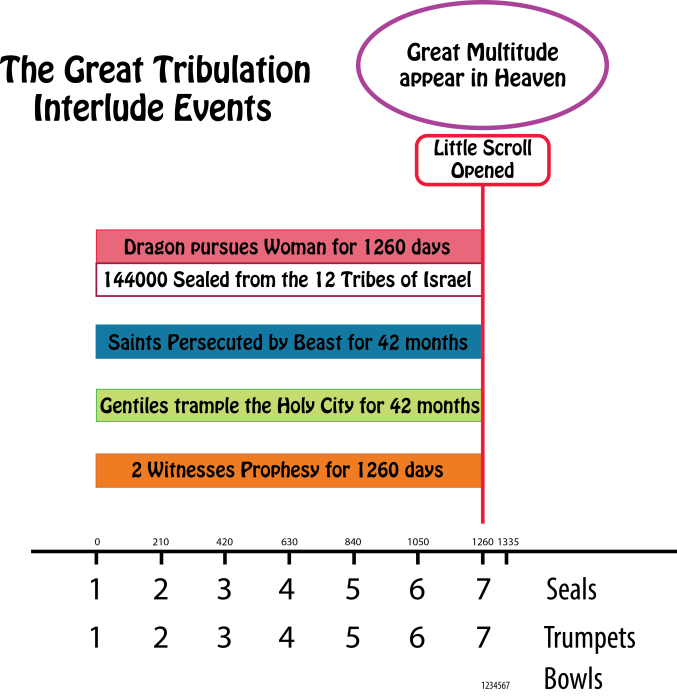 After this I saw four angels standing at the four corners of the earth, holding back the four winds of the earth to prevent any wind from blowing on the land or on the sea or on any tree.   Then I saw another angel coming up from the east, having the seal of the living God. He called out in a loud voice to the four angels who had been given power to harm the land and the sea: “Do not harm the land or the sea or the trees until we put a seal on the foreheads of the servants of our God.”  Then I heard the number of those who were sealed: 144,000 from all the tribes of Israel.

The four angels mentioned in the scripture above are considered to be the same angels as the those who hold the first four trumpets.

Pre tribulationists contend that the rapture is after the sixth seal when the Great Multitude appear in heaven just before the seventh seal is opened and certainly before the seven trumpets (which are considered to be the wrath of God).

Pre tribulationists consider the events of the first sixth seals are not part of the great tribulation.  (Given that a quarter of the Earth’s population are killed when the 4th seal is opened, this is a bit hard to accept)

God’s wrath is then poured out on the nations; namely the seven bowls of God’s wrath which are also part of the seventh Trumpet.

How then do post tribulationists account for this scripture which suggests that the trumpet judgements follow the seals sequentially rather than occur simulatanously with the seals.

The woman fled into the wilderness to a place prepared for her by God, where she might be taken care of for 1,260 days.

The woman was given the two wings of a great eagle, so that she might fly to the place prepared for her in the wilderness, where she would be taken care of for a time, times and half a time, out of the serpent’s reach.

Here we see the ‘Woman’ (Israel) flees to the wilderness where she is taken care of for 1260 days – this is the entire duration of the Great tribulation!  Could this ‘Women’ (Israel) be sealed and protected right from the beginning of the Great Tribulation, before any seals are opened or any trumpets are sounded?

This would mean that the vision of the 144000 being sealed from the 12 tribes of Israel does not occur in the same sequence that it is appears in Revelation.  It is a self contained vision that happens to be placed in the interlude between the 6th and the 7th seal.

It is simply not possible to describe the picture in Revelation and maintain sequence without becoming very disorganized.

Revelation is like a picture and John describes the elements sequentially one at a time but not necessarily in time sequence.

Revelation is not like a scanner or a fax machine scanning a picture from one end to the other.

But exclude the outer court; do not measure it, because it has been given to the Gentiles. They will trample on the holy city for 42 months.  And I will appoint my two witnesses, and they will prophesy for 1,260 days, clothed in sackcloth.”

The rapture of the Great multitude occurs in an instant and therefore could well take place at this point in the Revelation sequence just before or when the seven seal is opened.

Just as the 144000 from the 12 tribes of Israel are sealed and protected for the entire duration of the Great Tribulation, the Gentiles will trample the Holy City for 42 months and the two witnesses will prophesy for 1260 days.

The visions of the Gentiles trampling the Holy City for 42 months and the two witnesses prophesying for 1260 days are in the interlude between the 6th and the 7th trumpet.

As with the sealing of the  144000, the place in scripture where they are mentioned corresponds to the end of the 1260 days or 42 months over which they occur.

Similarly, the 144000 from the 12 tribes of Israel were sealed and protected 1260 days before the seventh seal was opened.

The Great Tribulation lasts 1260 days and begins with the revelation of the Antichrist when the first seal is opened.   (2Thes 2:3)

This means that the 144000 Jews are sealed at the beginning of the Great Tribulation before any seals are opened and before any trumpets are sounded.

Thus even if the seals and the trumpets are totally simultaneous, there is no conflict with Revelations 7:2-3

He called out in a loud voice to the four angels who had been given power to harm the land and the sea: “Do not harm the land or the sea or the trees until we put a seal on the foreheads of the servants of our God.”

Therefore, these verses should not be a stumbling block to Post Tribulationists who believe in simultaneous recapitulating visions in revelation.

For those who believe that the trumpets follow sequentially after the seals, the rapture is thought to occur pre-tribulation when the sixth or seventh seal is opened (the trumpets being God’s wrath).  These brothers and sisters then have to explain away the verses that link the rapture to the seventh trumpet.  The first six seals certainly sound like tribulation too!

For those who believe in sequential seals and trumpets, and believe the rapture is at the last trumpet (post tribulation), they have to explain away the fact that the great multitude appearing in heaven is closely linked to the sixth and seventh seals.

If the Seventh trumpet is concurrent with the seventh seal, then there is no discrepancy.  The Church is raptured in the twinkling of an eye as soon as the seventh trumpet begins to sound (Rev 10:7).  The rapture is post-tribulation (after 1260 days) but pre-wrath (before the bowls of God’s wrath are poured out during the seventh trumpet).

The beast is given authority for 42 months to make war against God’s holy people and conquer them.  (Rev 13:5-7)

The seven Bowls are part of the Last Trumpet